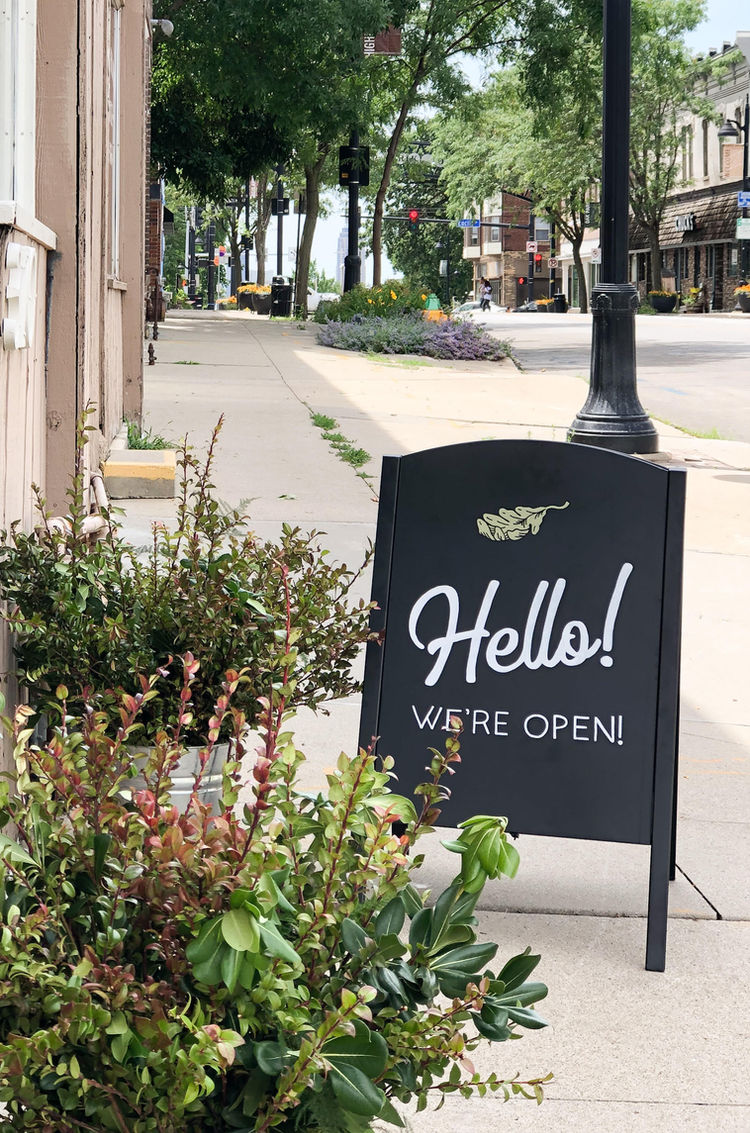 Armed with a dream and a desire to take people back to simpler times, Mallory Richardson and her husband, Jordan, hope their new “modern-day general store,” Des Moines Mercantile, will provide customers with everyday goods anchored by craftsmanship. Located in the historic Highland Park neighborhood, the store is filled with artisan-made products, including hand-crafted brooms from Indianola-based Franklin Broom Works, vintage pillows by @tornntatteredpillows and maple syrup from Great River Maple Syrup in Garnavillo, Iowa. With the store’s recent grand opening, I chatted with Mallory about her wishes for Des Moines Mercantile – and how she’s feeling now that her vision has come to life.

Tell me about the genesis of Des Moines Mercantile.

It started to feel like a reality around this time last summer. My husband and I were looking into living in the country and possibly having a country store that was influenced by the past but modern. I’ve seen similar businesses in other states, and I just fell in love with the idea.

It’s always been a dream of mine to open a shop of some sort, but it always felt too lofty, like, oh, no, that’s just something I think I want to do. And then I just felt like no, I want to pursue this, because it’s a real dream and something that would give me life and that I would really thrive doing. So, we went for it.

One day we met with some friends of ours who are opening a coffee shop right on the same street we’re opening our shop. We told them what we were thinking and that we wanted to pursue it. They told us about this space we could rent, so we went to look at it and we really liked it, and we signed a lease.

What are some examples of the products you sell?

The foundation of our vision is to provide things that are made like how they used to before mass production. Things that are made to last. We’re influenced by the past, so it’s kind of a modern-day general store. We have non-perishable foods that are all locally made, and so is most of the rest of our store.

We have brooms that are made by a woman who used to work for Living History Farms. People seem very excited about those, which is pretty cool. The broom that she made for herself, she’s had for around 10 years, and it still looks good. It’s really, really cool what she does because we could go to a big box store and get a plastic broom, and it would only last like a year or whatever. We also have wool blankets from the Amana Woolen Mill, which is one of the oldest in the country. We have prints and cards from The Red Door Press that they make using an old printing press where they individually put the letters in, like how newspapers used to be made.

How do you find these types of products?

A lot of different ways. It’s kind of random; there’s not a specific strategy. The Amana Colonies is a gem, so I thought of course I would sell things from them. They’re already inspired by the past. With the non-perishable food that we have, I honestly just Googled local products that would fit our shop. I also knew about some stuff already, like Lola’s Hot Sauce and Clear Creek Orchard Jam. I basically just call or email local business owners and ask about wholesale. I also went to a market last December, which is where I ran into The Red Door Press and the lady who makes our pillows. They’re vintage wool and totally within our vision as well. We want to be timeless.

I use an app called Faire, too, which is for shop owners to purchase wholesale. You can find people and purchase products through this third-party app. I found some stuff from Moglea, a company in Des Moines that makes hand-painted prints and cards, on the app. It’s also where we got some of our journals and soap.

What’s the inspiration behind your shop design?

I wanted to be minimal. Shops can get pretty cluttered, and even though we have tons and tons of products, I wanted to keep it simple. Our tables are all salvaged wood from the coffee shop that’s going down the street, which makes it pretty special.

It’s also kind trial and error. Old general stores had floor to ceiling shelving behind the register where people would get candy or whatever, so that was my vision for our store, and I’ve probably rearranged the whole shelving unit 10 times. My dad built it. Something else that was common in old general stores was wainscoting, so we installed that as well and painted it green.

I’m really just inspired by history. My husband, Jordan, and I took a trip to England this time last year. Things are so much older than they are here and have kept the same style for years and years and years. So that was super inspiring for us, going to different pubs and even castles. Just really, really beautiful places.

Speaking of trial and error, what are some challenges that you’ve faced along the way?

Social media is very difficult. It might come naturally to some people, but since we aren’t even open yet, putting ourselves out there on social media and trying to tell people who we are has been really hard. It hasn’t been one of my favorite things in the world, but I’ve learned as I’ve gone and talked to different friends who are in marketing, which has been super helpful. I mean, they say you’re supposed to post like every day, but I probably do three times a week. I look back at my feed from the beginning and I cringe just a little. I think, well, I wish I would have done more, but it is what it is. And it’s the foundation I’ve built upon.

My logo has been trial and error, too. Our first version, I designed and a friend of mine helped me format it, but I wasn’t super in love with it. Then a high school friend reached out to me at the beginning of April, and he said that he loves the idea behind my store and asked if he could give some tips for the logo. He ended up redoing it, and it’s amazing.

And then as far as the website, I started with a different company. I didn’t want to sell anything online at first, but then COVID-19 happened. That made me realize how important it is to sell online even when there’s not a pandemic. I talked to my friend who designed the logo, and he said you need to switch to a different website provider. We use Squarespace now, which is a lot more e-commerce friendly, although we still haven’t put anything on our website to sell yet because I’m still learning.

What are some wins so far?

One is the fact that our friends are opening a business down the street. That has been a total win for us to have somebody alongside us who’s going through something similar and that we can bounce ideas off of, even though we’re completely different businesses. That’s a big deal that not a lot of people have when they start from nothing. I also did Mother’s Day baskets and I had about 60 people order baskets. That was a huge blessing. I just did Father's Day baskets, too.

I’m sure opening a new store at any time would be challenging, but especially now so. How has COVID-19 changed things for you?

We wanted to have a big grand opening party and have drinks and cookies, but that wasn’t safe. Honestly, though, not being able to took the pressure off because there wasn’t much we could do and less to prepare for. We’re also only letting 10 people in at a time.

It’s your first full week of being open. How are you feeling?

I definitely have my moments of being pretty nervous because we put so much hard work into it, so I’m just hoping that people like it. It’s just been me and my husband with this vision, and I think it’ll be pretty cool to see what people think. It’s also a really vulnerable feeling. I’m just trying to be confident in my vision and what we’ve created. It’s kind of surreal.

What are your goals for Des Moines Mercantile?

My goal is to have everybody feel welcomed and be able to find something that they love. We want to have everyday goods for everyone. I know that’s kind of unconventional for retail, but that’s something that I really want our store to feel like – somewhere welcoming for all people.

I think that we are hitting a niche that could be really good for our city. I’m really excited to see what sells well and what we can celebrate and let people know about. We also want to bring our makers in so that they can show people how they do things and answer questions and that sort of thing. Something else that we would really love to do is have dinners maybe twice a year to thank the people who we source products from. We want to figure out a way to celebrate community and thank people for all their hard work, because they are making things by hand.

As someone who just took a big leap of faith, what’s your advice to other budding entrepreneurs?

I’d say that your passion and dreams are real. What you’re feeling is real, and it’s worth pursuing. And sometimes it’s easy to not feel that way, but it’s a big deal. Something I think is really valuable about millennials is that we have access to this confidence to do what we want to do. Don’t believe the lies in your head or let people tell you different. I don’t want to look back five years from now and think, what the heck was I doing? I have all these dreams, so why would I let myself think they aren’t good enough? 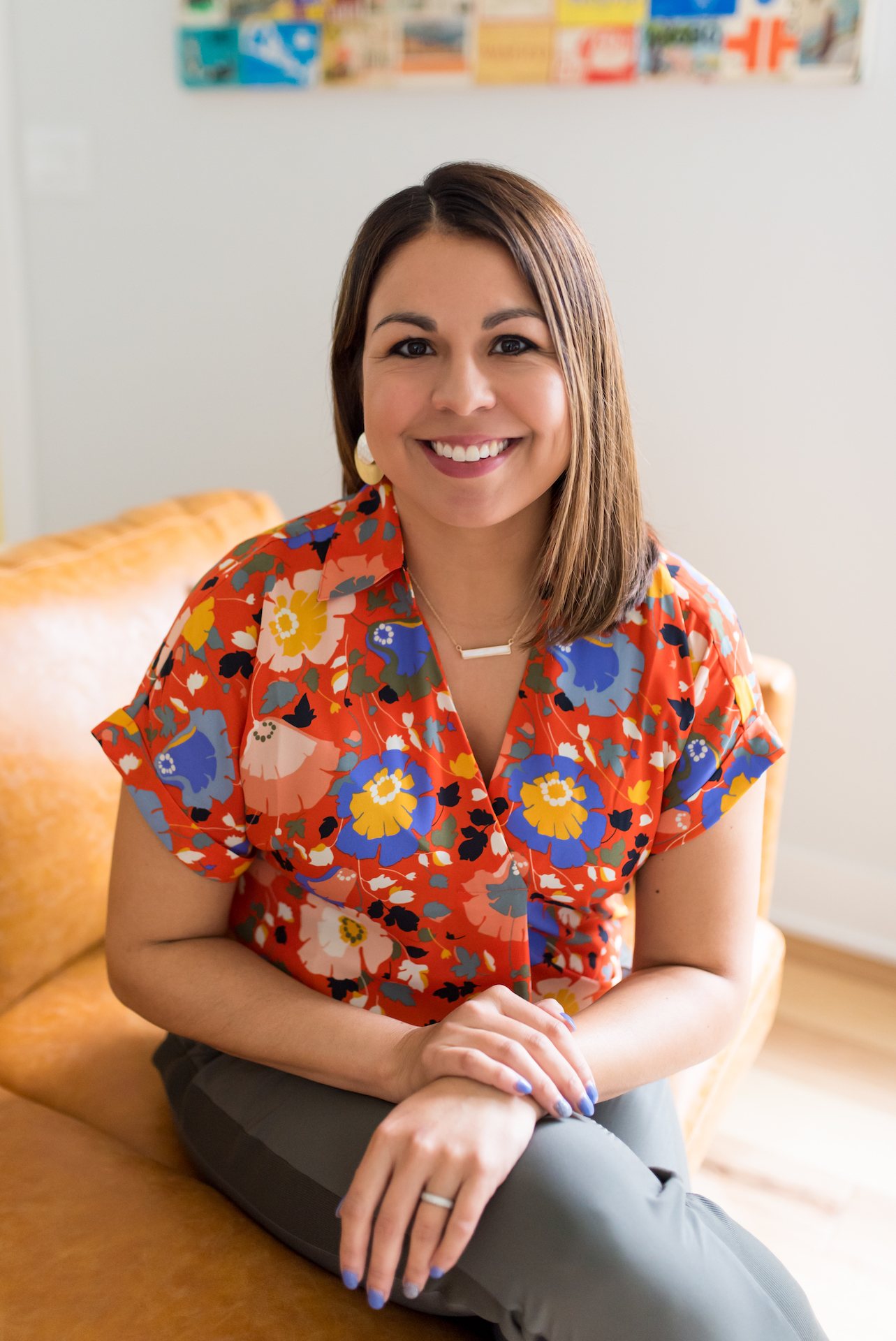